Injuries to the hand, wrist and fingers can be divided into two main categories. They are either acute injuries, which occur suddenly as a result of direct impact or a fall onto an outstretched hand, or chronic overuse injuries, which develop due to repetitive stress.
Acute injuries are common in sports where players use the hands to control the ball or tackle other players. Acute injuries also include those that occur as a result of a fall, where the person has used their hand to break their fall, leading to injury. 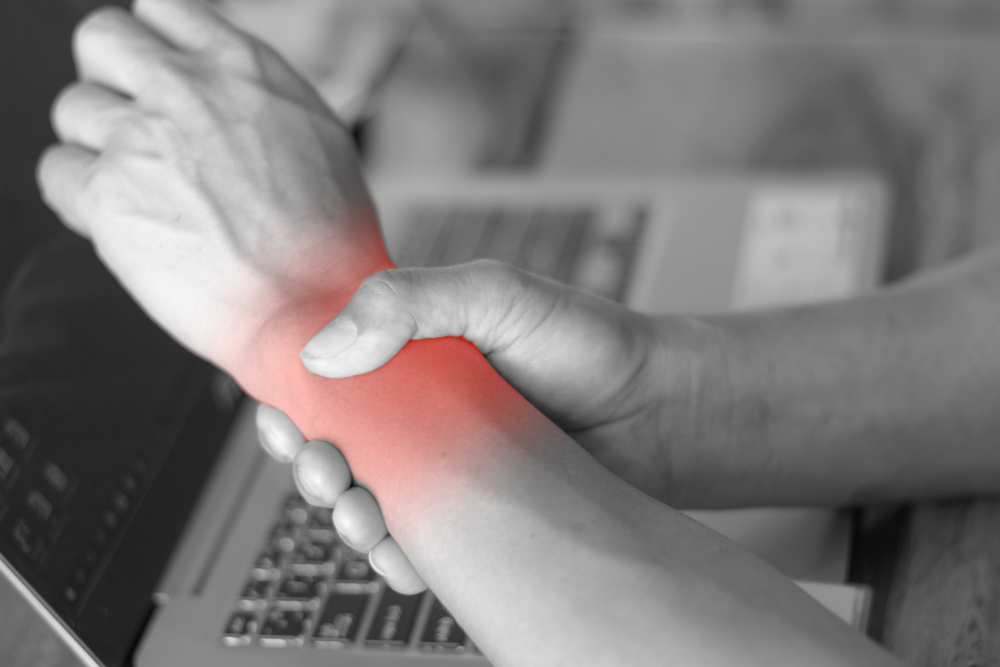 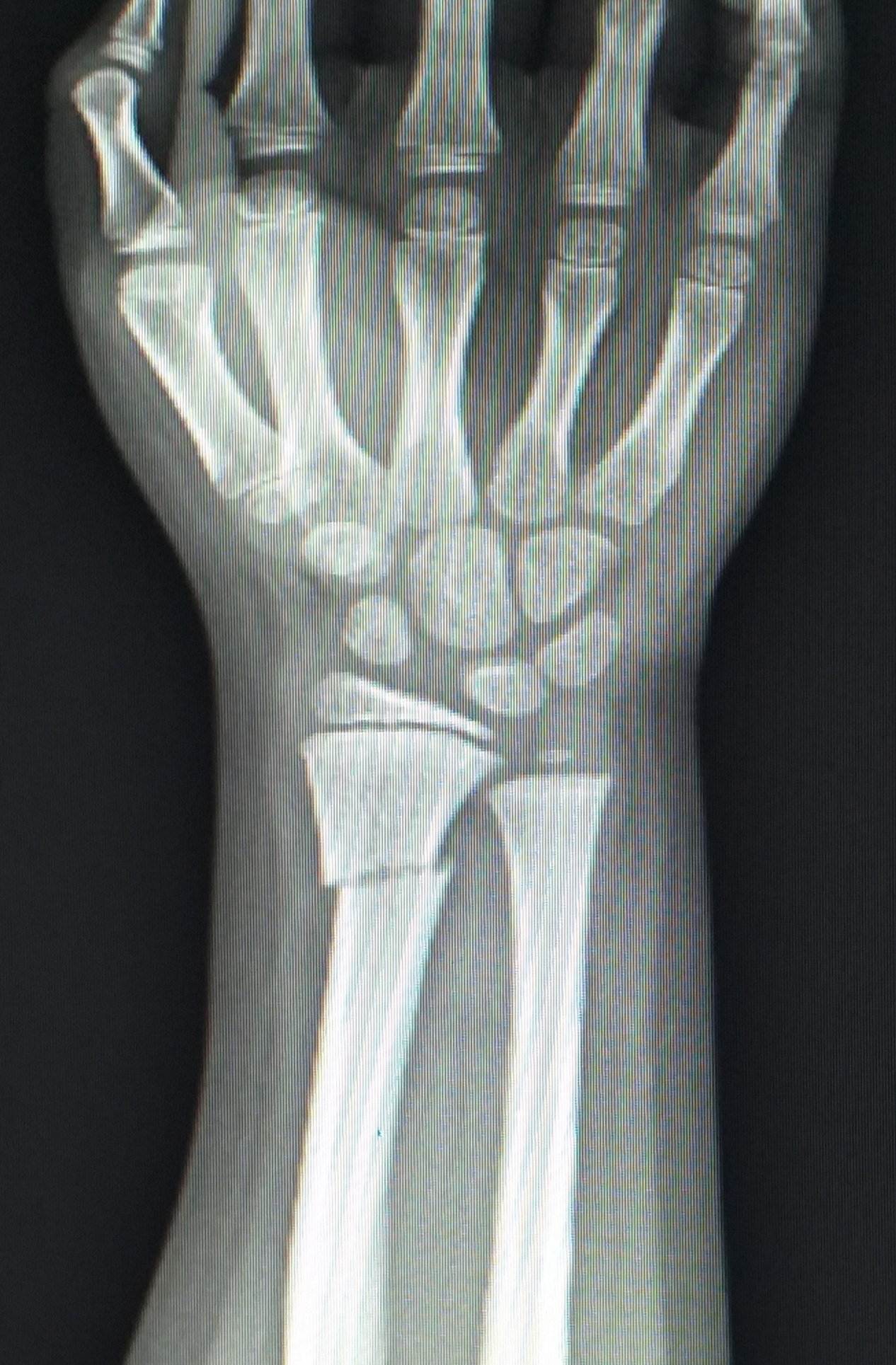 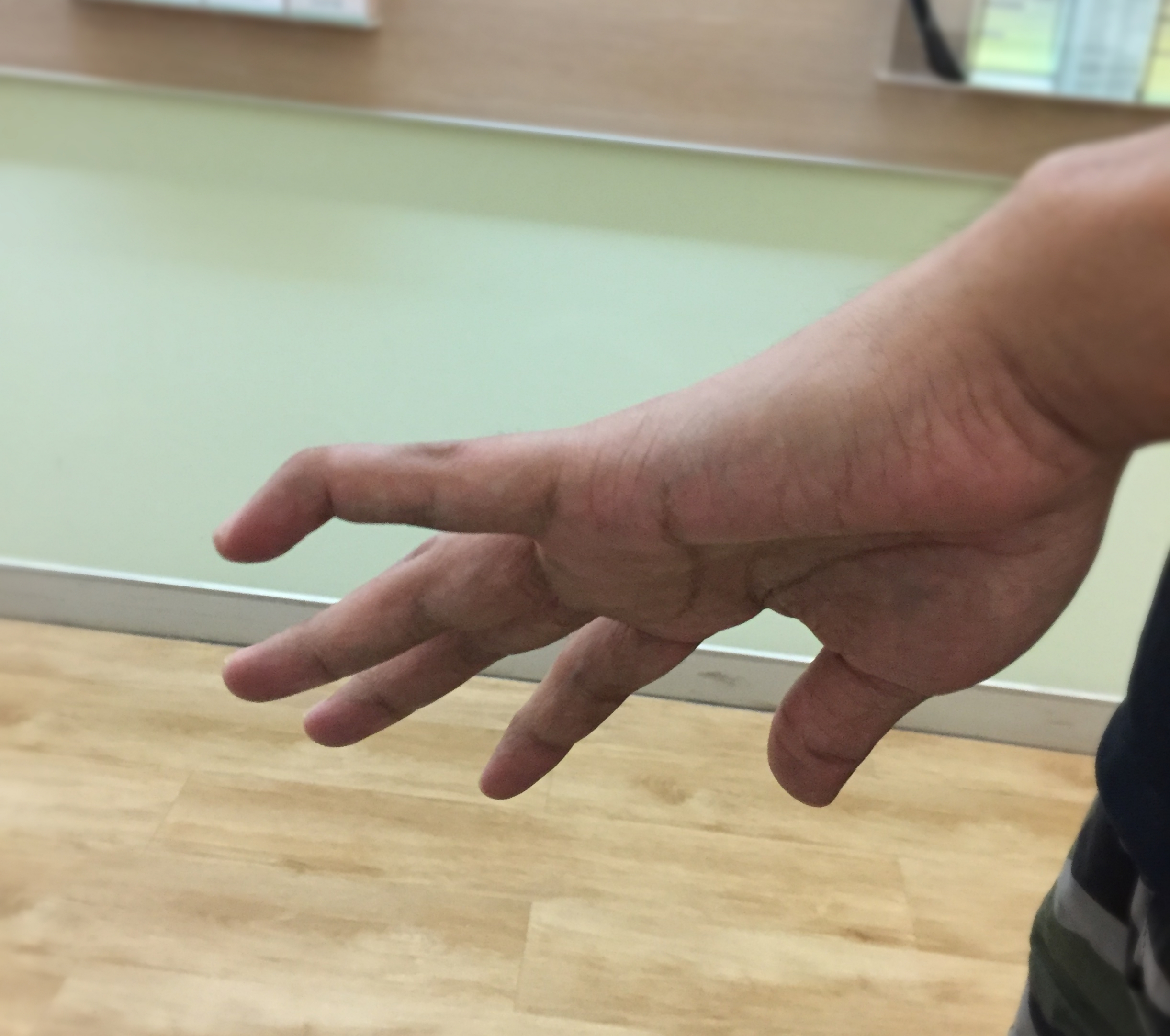 • Fracture of the wrist, such as a broken radius bone, which commonly occurs when someone falls onto their outstretched hand.
• Fracture of one or more of the bones at the base of the hand, such as a broken scaphoid bone, which is on the inside of the wrist at the base of the thumb and also occurs due to a fall.
• Ligament injury to the hand or wrist, including tears of the scapholunate ligament which holds the centre of the wrist together, as well as ulnar collateral ligament injuries of the thumb (Skier’s thumb).
• Triangular fibrocartilage injuries (TFCC tears), which is a structure that provides stability to the “ulnar side” (little finger side) of the wrist and can be injured from a fall or if the hand is forcefully twisted by an object in the hand.
• Injuries to the tendons that control the movement of the fingers. This includes mallet finger, which is common when a ball hits the tip of an outstretched finger, or jersey finger, which can occur when holding onto an opponent’s clothing with the tip of your fingers.

Overuse injuries of the hand, wrist and fingers are common in sports and occupations where a person is frequently using their hands. They include:
• DeQuervain’s tenosynovitis, where the tendons and their sheath on the inside of the wrist become inflamed. This is common in people who suddenly increase the amount of lifting they are doing (such as new mothers).
• Wrist impingement, where the bones on the back or “radial side” (thumb side) of the wrist are forced together by repeated movements. This is common in weightlifters (dorsal wrist impingement) and golfers (radio-styloid impaction).
• Ganglions, which are small cysts that form on the back or front of the wrist and are commonly associated with irritation and swelling within the wrist joint.
• Carpal tunnel syndrome, where the median nerve is compressed as it passes through an anatomical tunnel formed by the wrist bones and ligaments. This is common in office workers. See more information about carpal tunnel syndrome at the bottom of this page.
• Trigger finger, where one of the tendons that pull your fingers closed becomes swollen and it is difficult to bend or straighten the affected finger.
• Tendinopathies (tendon irritations) around the wrist and hand, including common sites such as flexor carpi ulnaris, which causes pain on the “ulnar side” (little finger side) of the wrist and forearm. 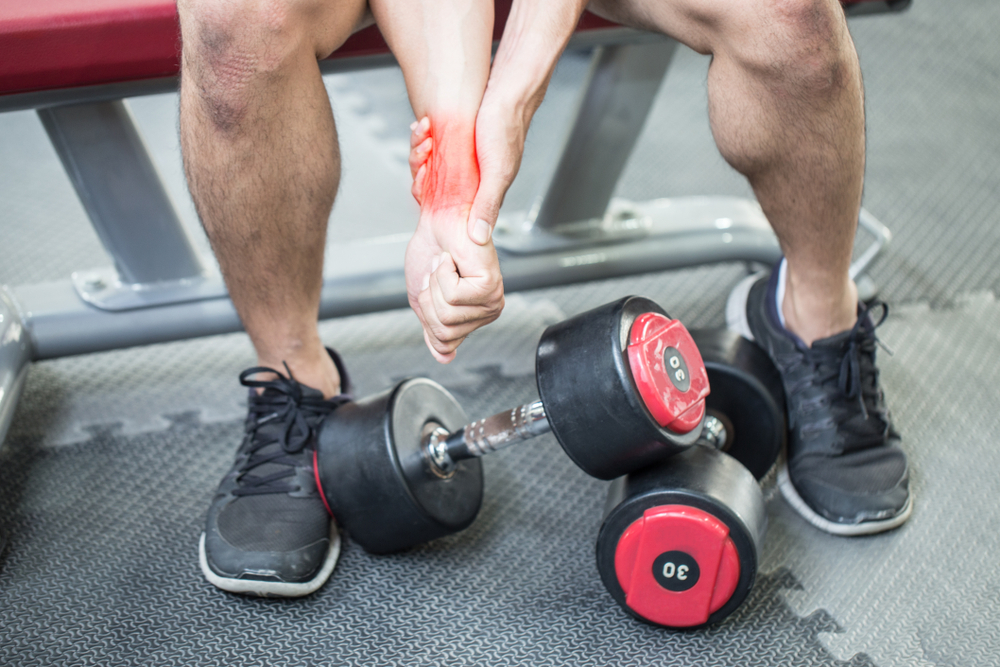 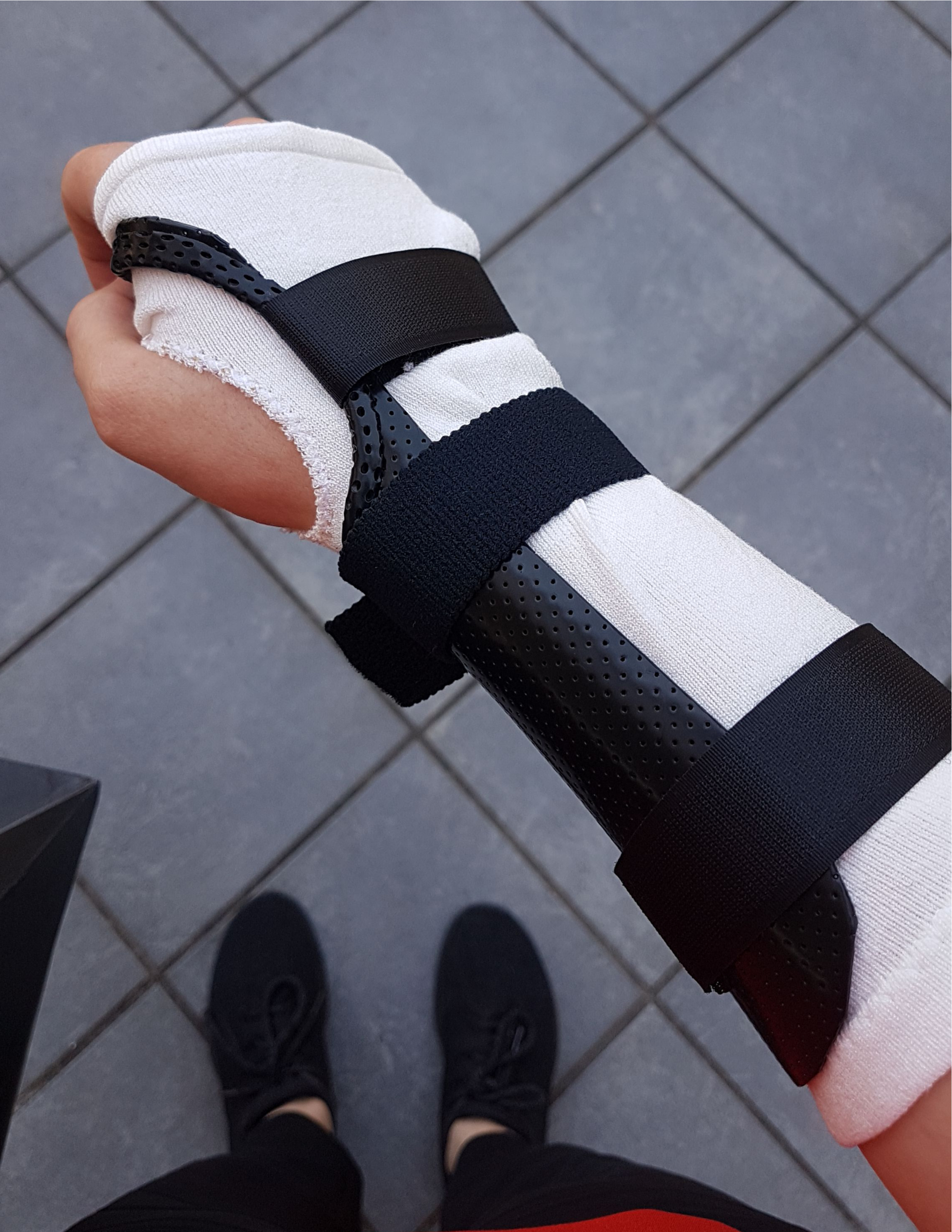 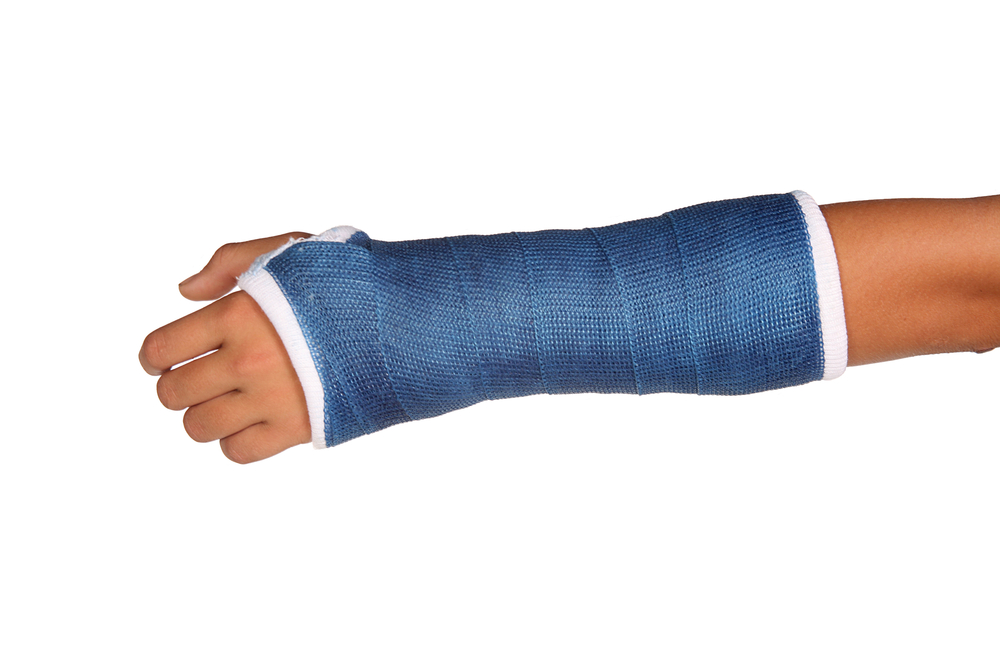 Treatment of hand and wrist injuries depends on the nature and extent of the injury and is guided by a thorough assessment performed by the physiotherapist. Certain injuries, such as fractures and ligament injuries, may require immobilisation, whereas other injuries may require specific exercises or modification of movement patterns and work equipment. Examples of different treatments we offer at Glebe Physio include:
• Casting: This involves immobilisation of a broken bone within a fiberglass or plaster cast to allow it to heal. Visit our casting service page for more information.
• Splinting: Another form of immobilisation, splinting offers protection for a healing bone or ligament while still allowing movement of the unaffected joints.
• Taping: Often used for support of an injured muscle, tendon or ligament during sport or work activities.
• Manual therapy: “hands-on” treatment to reduce stiffness and restore movement in muscles and joints.
• Exercises: Prescription of exercises that aim to facilitate healing, improve range of motion and/or develop strength.

What is RSI (repetitive strain injury) and can physiotherapy help?

RSI is an umbrella term that encompasses any condition that involves irritation of muscles, tendons and joints and is used commonly to describe problems around the wrist and forearm. These injuries come on slowly over time and happen as a result of using the hand and wrist extensively in awkward positions. Some examples of activities that may lead to this condition include typing, hammering, drilling or working on assembly lines. The symptoms associated with RSI include pain (usually described as aching or burning), stiffness, pins and needles and/or weakness.
After identifying a specific structural diagnosis, management involves modifying activities and movement patterns to give the irritated structures a chance to settle down. This recovery period may require a specially fitted custom or off-the-shelf wrist splint. It then becomes important to improve strength, posture and joint movement to ensure the problem doesn’t come back. Treatment may also include taping to help offload irritated and painful structures and acupuncture for symptomatic relief. 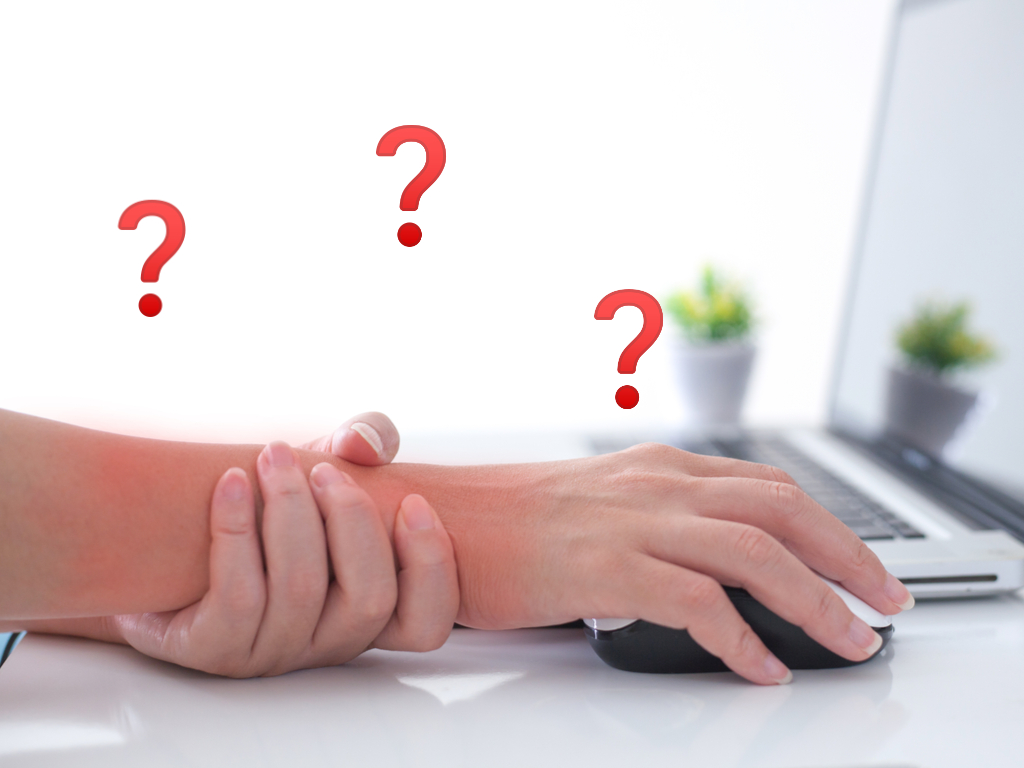 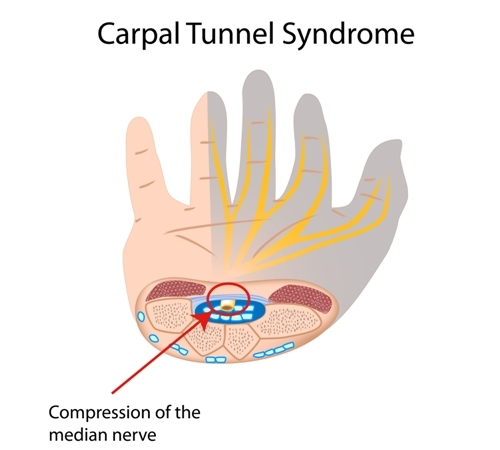 What is carpal tunnel syndrome and can physiotherapy help?

Carpal tunnel syndrome is a condition where the nerves and blood vessels that run through the wrist become compressed and can cause pain or numbness/tingling in the hand and fingers. Specifically, this is a condition that affects the median nerve. The carpal tunnel is roofed by the bones of the wrist (the carpal bones) and enclosed on the other side by a long ligament. It is a very narrow space, so any swelling of the structures in this area can cause significant compression. It’s common for this to occur as a result of repetitive movements at the wrist such as typing, as a result of arthritis in the area or as a result of changes to the body’s physiology during pregnancy.
Carpal tunnel syndrome can usually be managed quite effectively through a combination of wrist posture modification, use of a specially designed wrist splint, as well as wrist exercises such as tendon and nerve glides. If you still experience significant symptoms after these approaches, we work closely with specialists who can progress to other treatments including injections and surgery.

Here at Glebe Physio, we are experienced in the assessment and treatment of hand, wrist and finger injuries so if you have any further questions, please had over to our Contact Us page or book in today for an appointment and let us help you with your recovery.

If you would like to ask a question about our services or anything else, visit our Contact Us page to get in touch.

If you are ready to make an appointment, visit our make a booking page and let us help you with your fitness or recovery.

Please note that the information we provide on web pages like this one are for general information and educational purposes. We recommend speaking to a qualified physiotherapist or exercise physiologist to assess your individual situation.